Whadjuk are the people of the Swan River plains,  whose country is now occupied by the greater metropolitan area of Perth. For more detail see the map below and refer to Bennell.1

Whadjuk Nyungar have managed the coast for tens of thousands of years. Whadjuk Nyungar traditionally lived in extended family groups, caring for country through cultural ceremonies such as song, dance and use of fire. People’s access to the sea was regulated according to season, status of family group member, totem and presence of sacred sites.2

The map shows Nyungar names for key places and features, including the coast and islands, within Whadjuk country.3

According to traditional owner Dorothy Winmar’s account, life in the area was very comfortable.

”…my Grandmother told me, the way she told it to me, it sounded like it was paradise. They didn’t want for anything. They lived off the land and the fish from the water. They got the kangaroo skins pegged out and cut them up to dry them and sewed them to make coats; yongka booka, or kangaroo coats, choota bags out of them, rugs to sit in. They were quite contented with their lives.

Yes, they used to catch their fish with spears (gidjees). They used to hunt with spears, catch possums and all sorts of animals with fur on them to make the kids clothes out of them; those bookas. Without the booka, it was very cold in the winter. They even made shoes out of fur. They were very clever people; we are still clever. They hunted for their living and lived off their land." 4 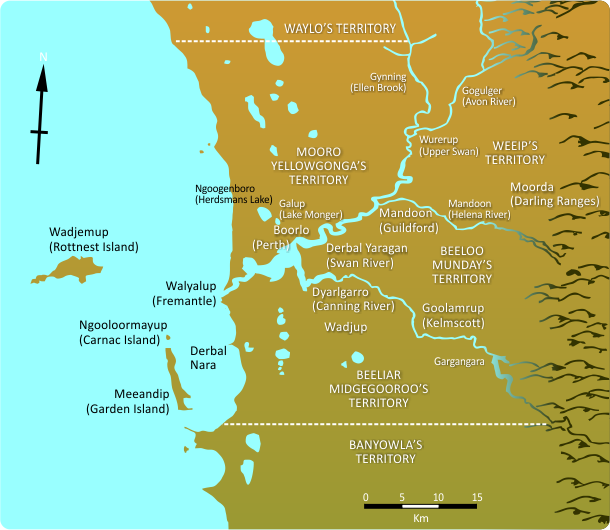