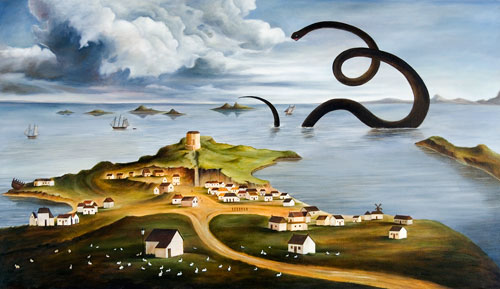 Traditional owner and long-time Cockburn resident Reverend Sealin Garlett recounts the following story which relates to the creation by the Waarkle of the whole of the coastal plain and its lakes and waterways.

There was one man who had a dream, and this man’s name was Boornyarri who dreamed that this big spirit, in the form of the Waarkle, came to him and said, “we are going to water (flood) this place. You know this is koorndan; this is shame what these fellas are doing because, when other people heard about it, they kept coming down. There were a lot of little kids who were deformed and a lot of kids were neglected and a lot of these old people were affected by this drink. Boornyarri and a few people who were left and not drinking this stuff, began to feel ashamed about what was taking place.

So the Waarkle came and he talked to this fella, Boornyarri. He said you know we going to send a big water to this place and the water is going to cover this area. These people won’t go, but they know the law of this land. So, Boornyarri said to the old people, “hey, I had a dream and this is what happened.” And the old people said no, no more dream. You know, this is a really good stuff that we got now. We don’t have no more dreams about this; we are all going to get along. But Boornyarri said, “you know this fella said the water’s going to come and wash all this away, the leaves and the fruit and roots that you now. There‘s going to be no more left.” And this other fella said, “No, look I can see plenty big mob there.”

So Boornyarri went away. He was worried that hardly anyone listened to him. Later, this Waarkle, this old fella, came back again and he said that the creator has got seven people with you; there are going to be seven altogether. There are going to be three women and there is going to be four men and, Boornyarri, you have to lead. Tell these fellas, get them together, tell them don’t touch any of that plant and keep talking to your people. But you know they keep talking and nothing came and then one day, the water came down. It rained and rained and the water came down. The water came along side of their camp and was getting higher and higher and these old fellas, they were laughing and laughing. See Boornyarri, we don’t have to walk long way now to get water. We got kierp just here. But he told them, “no, you mob, you’re not allowed to do that. You mob got to listen now, this is true, you got to listen to me. And the water kept coming down. Then Boornyarri and the others went to the high cliff of Kings Park. And all these other fellas were looking around. They went to his camp and looked, and found nothing. The people started to sing out and they started to light a fire. But the rain, that rain kept coming. Later, when all the water was lifting and the people were beginning to go to where Boornyarri was. Then, from out of the distance, this Waarkle came to pick them up. There was seven people on this hill and when he came, the Waarkle stopped where Boornyarri was and he helped all these fellas on his back and they moved out.

All these other people got on the rocks and jumped on the Waarkle’s back, but they slide off. They tried to hang on to the tail, but the Waarkle pushed them off. And he (Uncle Cliff) reckoned around that big centre where Kings Park is, all that area was the feeding ground of the Waarkle. And he (Uncle Cliff) reckoned he circled that ground and he mixed that sand up when he circled. Then he went out, over the river where the Narrows was built, over where the Causeway is, and out past where Trinity College is and he made a track to York. Uncle Cliffy said to me, that if he could take me on an airplane today, boy, I would see exactly the same track, of where that fella left Kings Park and went to York. He stopped and laid down at York. This fella said to Boornyarri not to get off, don’t get off. When the water was subsiding, they got next to a rock and they stepped onto the plateau of this hill. When they stepped onto the rock, the snake disappeared behind the rock. Then the Great Spirit said to Boornyarri that he had a look over towards Perth and the area around York, and he said that he would never cause a flood again, he would not do this to Nyungar land. Then the Waarkal went down towards Beverly and Brookton and they reckon the last place he camped was at Boyagin Rock. That was the resting place or Ngoorndiny place of the Waarkle.

See where he left York and then moved them rocks. That’s his camping ground there. And all along Nyungars from that area, right through the wheat belt, right down south, whenever there was a water hole, you know, there was a always tracks of a snake being part of that area. I remember when I was a young boy my Uncle brought a big snake into our camp and he said to us boys, if ever I catch you boys shooting shangais at this snake, I’m going to boot you, you know where. You have to leave this fella alone. He’s the protector of this water here and you’re not allowed to chase him away. He said, if you chase him away, this water will go; this water will dry up. And, you know, about 10 years ago, I said it to one of the theologians of Murdoch University, Bill Loader; I told him, you know when them fellas started to put that stone in the ground at Kings Park? They started to dry up the water area and if we have a look now, the water level has been the worst it’s been in about 100 years.1